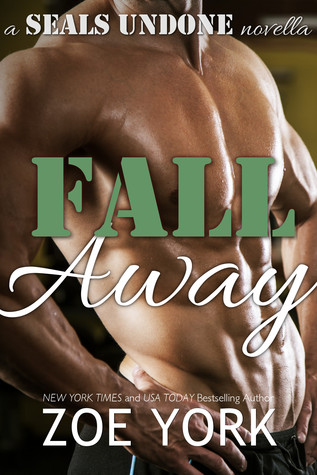 Navy SEAL Trick Novak knows he needs to find a better way to deal with his chronic insomnia, but a warm body and a ready smile work just fine. Until he meets Gaby Ellis, and discovers she’s roommates with last night’s hook-up–and thoroughly disgusted with his player ways.

Except maybe falling in love with one who’d rather not know yours.

This is the second novella I read that was written by Zoe York. All of the SEALs Undone books can be read as stand-alone, I guess… because I personally started with book #2 and I had absolutely no problem understanding it.

And while the second book Fall Hard was nice and sweet, Fall Away was a little bit darker, not by a lot, just a little.

It all starts with Patrick “Trick” Novak waking up in the wrong bed. He has chronic insomnia caused through his PTSD, so he tries to cure himself with random one night stands. One of his latest hook-ups is Gabby Ellis roommate, even though he originally wanted to go for Gabby, he ended up with the roommate. Let me just say: AWKWARD!

I really liked that the roommate situation wasn’t sorted out like “Oh, we totally have chemistry, so I totally don’t care that you hooked up with my roommate. Want to make out?”, but more like “Yeah, you slept with my roommate and I’m not sure if I don’t care, but let’s move slow, okay?”

Trick was totally likeable, even with his whole player attitude, which really was just a facade.

And Gabby, his HEA, was in the beginning this shy and quiet person, but after meeting Trick she moves out of her shell. I really liked the progress in her character.

Also the romance between those two was totally believable, steamy and quite funny and they had some hot not-sex-scenes.

I would recommened this to anyone who would like a nice, short contemporary romance that doesn’t require any background information for you to know.