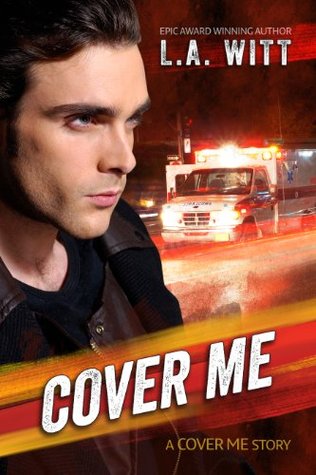 Synopsis: When paramedic Nick Swain responds to a shooting in a seedy neighborhood, his entire world is thrown off its axis. His life is threatened…twice. Allegations of racism and medical neglect threaten his career and his ability to sleep at night. Not that he’ll be sleeping any time soon after the incident throws him into the path – and arms – of Detective Andrew Carmichael.

One hot night after another with Andrew may help Nick relieve some stress, but sex won’t solve every problem in his life. With the media hounding him and the city watching his every move, he starts to wonder if the world is out to get him.

The world may not be out to get him, but someone is.

And that someone wants Nick dead.

I’m kind torn by this, because on the one side I liked it and on the other side I’m not sure if I liked it and I’m not really sure how to express my feelings about this one. Sometimes I hate this whole language barrier thing.

The one thing I can say for sure is that this was a new reading terrain for me, because it was a gay romance.

I liked the story with the stalker, but I couldn’t figure out how they could forget about one of the suspects. They arrested suspect A, who tried to … what exactly did he try?… stalk him… did he hurt someone? I just can’t remember… only to forget about suspect B, who actually wanted to murder Nick, the paramedic, and tried as well.

The both guys were kind of sweet together. They had their ups and downs, but all in all I liked their interaction.

Nick is a bi-sexual paramedic, who has to face racism accusations, because on a bloody shooting scene where he got to help some people, he black-tagged a black woman. Everyone was all like “you don’t want to treat her, because she’s black”, when black-tagging only means that there wasn’t much he could do for her, so he tagged her and worked on the other people on scene, because there was hope they would survive. He had to make a choice with the facts he could see, but everyone is accusing him of racism. And some people want to kill him because of it.

I really felt sorry for him and I liked him, but I couldn’t really connect with him for the first half of the book.

His other half is Andrew, a gay cop. He really tries to protect Nick, goes with him on a shooting range, teaches him how to shoot, gives him a kevlar vest. He wants the best for Nick. I liked him as well.

The thing that was bothering me with this book were the constant sex scene. The first two or three ones were nice and I’m totally okay with that amount of scenes, but they just keep coming (EDIT: OMG, totally ambiguous, laughing so hard right now) and I was kind of annoyed. I get that they can’t leave their hand of each other, but I feel like there were 8 (?) sex scenes, all a few pages long. It kind of slipped into erotica for me.