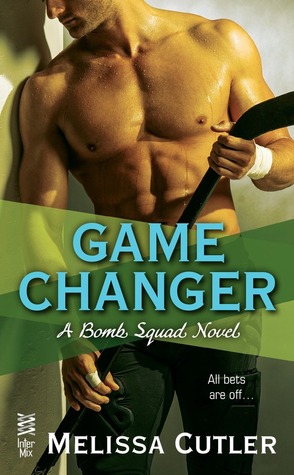 Welcome to Destiny Falls, New York, home of Bomb Squad—an ice hockey team full of rugged military heroes. A once-in-a-lifetime opportunity has the team captain packing his bags for greener pastures, but saying good-bye to the woman who’d captured his heart is easier said than done…

After being wounded in combat, Brandon Theroux lives every day like it’s his last. He never could have imagined that the sleek mechanics of his prosthetic leg would open so many doors, including minor celebrity status as a fitness model and a well-earned reputation as a rakish playboy. The only door it hasn’t opened is the one to Harper Johnson’s bedroom.

Harper has too much self-respect to join the ranks of Brandon’s “carpe diem” conquests, but when she needs someone to keep the peace in the tavern she owns, Brandon offers his help—as long as she agrees to a very tempting trade. It isn’t long before the two realize that a deal struck between friends who can’t keep their hands off each other has the potential to be a whole lot hotter than either of them is prepared to handle…

Let me tell you a story about an ice hockey player, who is missing half a leg and about a bar owner, who is fighting cancer on a daily basis. Oh no, wait I can’t tell you that kind of story, because Melissa Cutler already did tell that one and she did a beautiful job.

This book had everything: humour, drama, graveness and some fabulous main characters. Did I mention ice hockey and a show like the bachelor ?

Also I’m a sucker of enemies turning lovers. Even though Roxy and Brandon were more like frenemies at first, then they tried angry sex and let me tell you that scene was hilarous,  because they just couldn’t do it. So funny. After that they became friends and then eventually lovers.

“Baby, we were never meant to be friends.”

I loved that development in Game Changer. Both Brandon and Roxy were really likeable characters and I wouldn’t mind to have them both as close friends.

This book can be read as a stand-alone, but I recommened trying the others as well, because they are just as fabulous as this one.