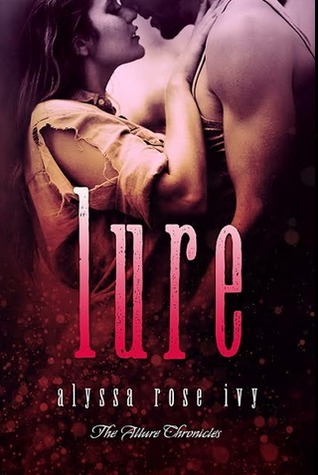 Synopsis:
There’s danger in the beauty…

Two years, six months, and twenty-five days. That’s how long it had been since I’d seen my winged hero— not that I’d been counting. I’d suffered through years of counseling just to convince my friends and family that I wasn’t crazy and knew he didn’t exist.

But he did. And I was done waiting.

Days after college graduation I headed back down to New Orleans to retrace my steps and find Owen again only to find my life was about to get even crazier… thanks to the most beautiful and dangerous of all paranormal creatures, the Allures.

Lure was great, really great. It was so much fun. I was constantly cracking up which was mostly the fault of the three Allures – Ronald, Hugh and Violet. Loved those three. On one side I’ve found them really funny and on the other side after reading a good half of the book I grew really suspicious of them, since they never answered one of Daisy’s questions straight on and they kind of kidnapped her to go to Los Angeles.

I liked Daisy. Everyone of her friends and family thinks she’s crazy even though she isn’t. You can really connect to her, since her POV was nicely written. She was a little bit obsessed with Owen, but who wouldn’t want to find the hero who rescued you from a bunch of crazy vampires. She was a little to trustworthy in regards of the other Allures, but she had her motives: finding Owen. Like I said – obsessed.

We get some scenes out of Owen’s POV as well and he was a pretty cool. The relationship with his sister was adorable, he’s annoyed by her, but secretly he loves her. So cute. Then he is the advisor of King Levi, but Owen decided he needs a break, so he moved to somewhere in nowhere. He just wants some time for himself for a chance.

When I read the name Levi the first time, I was like ” why does this name sound so familiar?” And you know what, I actually have to first book of Alyssa’s other series, which features *drum roll* Levi 🙂 so I’m now off to reading that one.

Oh, how I liked the book in general you’re asking? It’s was a nice read, dragged on some parts, but that was ok. The one thing that made me very unhappy – just kidding, it didn’t – was that Owen and Daisy need till close to the end of the book to finally meet! I loved that they didn’t meet right in the beginning though, since that would have been too fast. Just a little bit earlier than the end would have been ok, too.

Also the instant sex that they had after they haven’t seen each other for 2.5 years, was kind of weird, because the only thing their relationship was built on, was the fact that he saved her years ago. That level of intimacy happened too fast, at least in my opinion.

The ending though… So heartbreaking. I hope everything’s going to work out for Owen and Daisy.

Do I recommend LURE?
Yes, read it. It was fun.