~ Edge Of Courage by Elaine Levine ~ 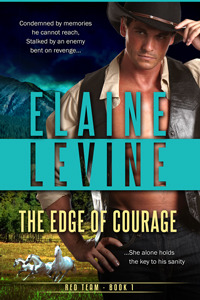 Haunted by memories he cannot reach, stalked by an enemy bent on revenge . . .

Rocco Silas has come home to Wyoming after long years as a Red Team operative in Afghanistan. It isn’t easy returning to civilian life, especially burdened as he is with a staggering case of PTSD or hunted as he is by an enemy determined to seek an eye-for-eye–neither of which can he battle until he confronts the truth of what happened one fateful day in the high mountain ranges of the Hindu Kush.

Mandy Fielding’s dream of opening a therapeutic riding center on her family’s ranch is almost within her grasp–until she hires Rocco Silas, a dangerous ex-Spec Ops friend of her brother’s. His haunted eyes and passionate touch promise a love she never dared believe possible. Can they confront the truth of his past and build a future together or will the enemy stalking him destroy them both?

This is one of the books I got as a freebie years ago. Like seriously. Amazon tells me I bought this November 4th, 2013 – it’s still for free if you were wondering – and I needed till 2015 to read it.

Now I’m mad at myself that I haven’t picked this up ages ago.

I really liked this. The characters were likeable, the suspense was high and the guys were hot and funny.

Mandy, our heroine, is the owner of a ranch and her brother Kit is one of the members of Red Team. She was nice, understanding, helpful and did I mention nice? She was patient with Rocco and was not like a damsel in distress.

Rocco, our hero, is a former member of the Read Team. He is suffering under severe PTSD, because of something he can’t remember. He was undercover for a long time in a really bad region and has quite some scars – inside and outside.

I liked the relationship between Mandy and Rocco. I just would have like it if there would have stayed just friends for a little longer. The sexual relationship came out of nowhere, but once I adjusted to it, I quite liked it.

You’re probably wondering what the Read Team is by now, right? It’s a secret army brand. I don’t want to say more, because that’s just to much too explain and you better get the picture if you just read it 😉