~ Fear For Me by Cynthia Eden ~ 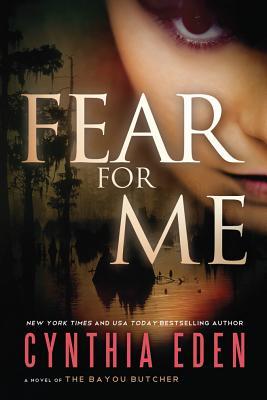 She’s the obsession two men share: one wants her love, the other wants her life.

A shared passion for justice first brought Baton Rouge district attorney Lauren Chandler and US marshal Anthony Ross together—when each played their part in bringing down the infamous Bayou Butcher. The sparks flying between the two made it clear they weren’t just a legal dream team. Then desire had to make way for duty, and what they had was done. But it would never be over.

Five years later, it’s none other than the Butcher who gets things started again, when his shocking jailbreak reunites the lawyer and the lawman…and reignites their love. But this time, the pair is in danger of being permanently parted—by a killer with revenge on his mind, and Lauren on the top of his list. As a new wave of terror sweeps through the streets and swamps of Baton Rouge, one man will pit his boundless passion against another’s relentless hate, for the life of the woman who obsesses them both.

I got Fear For Me on NetGalley … in german. I didn’t even know that they have some books in german. But I requested this, I’m german, so no big deal. I do have a problem now though. Do I review this in english or german? The book is in german … but on NetGalley, soooo…. yeahhhh… I went with the language of my blog, which is english. Still doesn’t feel right though.

Whatever. Let’s talk about Fear For Me.

Fear For Me is the second book in the For Me series, but it can totally read as a stand-alone. Though if you want to read Die For Me as well, this might spoil it a little bit for you.

This book features Anthony Ross, who is a Marshall and Lauren Chandler, a district attorney in Baton Rouge. Years ago they defeated a serial killer together and put him behind bars. Guess what? He escaped.

Both Anthony and Lauren were likeable characters with some secrets. They had a lot of tension between each other and she was the light to his darkness. They just fit together.

Now let’s move on to our serial killer. Beware minor spoilers ahead.

Actually that’s serial killers, like plural. Yes, two killers are haunting Baton Rouge. The identity of the one of them is known all the time, since he just escaped from prison. The second killer’s identity was a little more tricky. I started with two guesses and then eliminated it to one and I was right. It wasn’t obvious, but my gut was telling me who it is and my gut is normally right in those cases.

I’m a huge fan of Cynthia Eden, so like always I was hooked to the pages and couldn’t wait to find out how it would all end. And that end was explosive. I kind of wished for some type of dramatic music while reading it.

If you do enjoy a good romantic suspense now and then, I would say give Fear For Me a try or any other book by Cynthia Eden.

Now that we are at the end of this little review, I decided to add my status updates to the review this time. I forgot to do the body count by the way. I was too absorbed by the story to bother. Minor spoilers again.