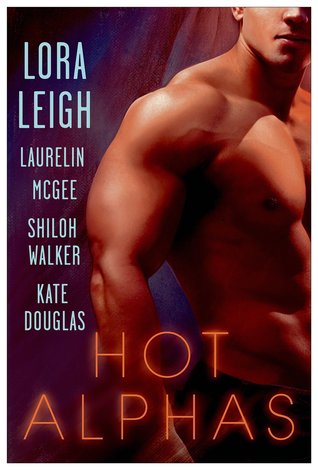 In Erin’s Kiss by Lora Leigh, ex-Marine Turk has become Erin’s sworn protector. The consistent target of her CIA-operative brother’s deadly foes, Turk is the only port Erin has to cling to in a storm. He promised her brother long ago never to touch her—but how can he resist a woman who aches to be with him as much as he burns for her?

In misTaken by Laurelin McGee, Jaylene Kim is a strong independent woman whose feminist values run deep. Even though attractive men are her weakness the last thing she wants is one telling her what to do. Until she meets her mysterious new neighbor. He makes her realize that you can still be strong and relinquish control . . . in the bedroom. But as their passion consumes them both Jaylene isn’t so sure he is who he says he is.

In Burn for Me by Shiloh Walker, Tate longs to spend his nights with Ali, a woman he’s loved for years. But while Ali’s heart pines to be with Tate, her head has reservations. Ali knows that Tate has never forgiven his father for the fight he had with his mother right before she left the house—and was never heard from again. Tate’s unresolved anger is a force to be reckoned with . . . but the heat that blazes between them is undeniable. Now both Tate and Ali are left to wonder: Can love really conquer all?

In Tangled by Kate Douglas, Nate shows up to work at Tangled Vineyards ready to do all the things he loves best—work with his hands, grow the grapes, and craft award-winning, full-bodied wines. But when something better comes along in the form of Cassie, the winemaker and former owner of the vineyard, Nate becomes completely love-drunk. Getting involved with Tangled’s number-one mixologist is a bad way to start off a new job, but with Cassie as a constant temptation, Nate doesn’t stand a chance…

This book did absolutely nothing for me. I had no connection to the characters, also I have no idea what this novella was actually about. What is the CIN? Who are all those people? After reading this I were left with a lot of questions, but no real desire to read the other books in the series.
Also who the heck is the Watcher and the Betrayer? I don’t get it. This isn’t made to be read as a stand-alone, at least in my opinion.

All I can say of this novella is: Jay, cut back with all the feminism. I get that you are an independent and strong woman who wants to be treated equally, but it was over to top. It annoyed me badly.
This novella overall was kind of embarrassing to read. I just felt like I should feel ashamed for what Jay and Noah are doing. They totally acted like 12-year-olds on their first date, except for the sex part.
I couldn’t take it anymore after their talk about whips and blindfolds and dominant sex. I dnf-ed it around 35% through.

Burn For Me by Shiloh Walker ~ 4 stars

The beginning was a little off, but overall this was my favourite of those four short stories. Burn For Me was sweet and adorable. Ali was the nicest person in the whole world and I would love to meet her, because she was a sweetheart, with cute kids. Tate had to fight with his past in this one, but in the end he manned up and got his stuff together. The one thing that bothers me though is that now I’m really curious about what really happened to Tate’s mother and that is a question that’s not answer in Burn For Me.

This novella wasn’t for me either, since I’m not big on insta-love and this was a clearly insta-love. Or would you cry after just meeting a guy, because he turned away from you when you can’t spend the evening/night with him? Like seriously, get a grip, Cassie!
Also this whole story just moved too fast for me and then there is this thing with her dad. Happened too fast as well and I had two people with Alzheimer in my family.

So all in all I wouldn’t recommend this novella, since the only novella that got more than 2.5 stars is Burn For Me by Shiloh Walker. I am a bit disappointed after reading them all. I really hoped they would be better. *sad face*. Also where were the alpha males?! Non of those male characters where even slightly alpa males 😦

I’m still going to give this 3 stars, because I liked Burn For Me.