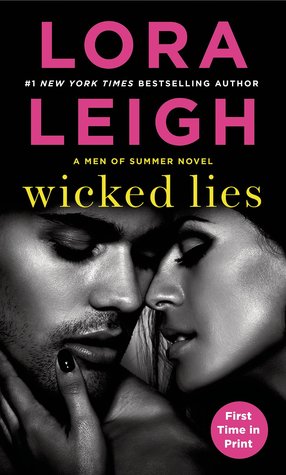 Jazz has never been known as a good boy.

A good drinker. A good partier. A damned good builder, and a hell of a good liar. Those are all descriptions that come to mind when the citizens of Loudon, Tennessee think of the tall, muscular, laughter-filled charmer they know as Jazz. And Jazz will admit to all of them: he likes to play; he likes to tease. And a little white lie surely never hurt anyone.

Until the sexy, too-shy kindergarten teacher, Annie. Annie sets fire to his lusts as well as to his heart. But Annie has a past he wasn’t aware of. A past that will draw Jazz into the heart of a conflict he had never expected to face. His little Annie is under the protection of the United States Marshal Service for her testimony that has a high profile, very wealthy businessman facing death by lethal injection. A man that will stop at nothing to see her dead.

Now, Jazz has to pull in some serious favors, just as he finds himself fighting not just an overprotective Marshal that he believed was the new school principal, but also a woman determined to save the charming liar that has never been serious. One that has never faced reality. A man that has always sworn himself a bachelor. A man that now is telling the most wicked lies of his life to steal the heart of the woman that has stolen his soul.

You want to hear my honest opinion of this book? Ok, Here we go. The synopsis sounded great, but after only 6% I was sure I would quit reading this, when I would hit my 25%-till-here-and-not-one-page-more mark in the book. But believe me or not, the book actually saved itself 2% before the deadline. It stopped being boring and unreal. Doesn’t mean that me and the characters clicked, because we didn’t. Nope. I felt absolutely no connection to the characters. No drive to need to know more about them. Jazz just was not really my kind of a man and Annie/Kenni wasn’t that remarkable either.

Jazz was a jerk. Especially around Kenni. Kenni wants to hide who she is and from the people that are out to kill her and Jazz is all like “let the world know who you really are, Kenni”. Jazz, Kenni does not want that. She survived without your interference for 10 years. So leave her alone.
Also his way of ending a fight is through sex. Seriously. No joke here. He can’t even stand a little argument.

This whole story made me cringe and I have absolutely no idea why. I just couldn’t read it to the end. I still had to quit reading it, even though I just said that Wicked Lies saved itself. I had to stop at 51%, and I’m sorry since this story had real premise to be good. It makes me so sad that this just did not do it for me.

By the way this was the first book by Lora Leigh I’ve read (if we don’t count a novella, which I didn’t like either) and I’m not sure I would like to try another one by her or even if I’m going to give Wicked Lies a second chance someday later. Probably not.

Little side note: I’m pretty sure you can read this as a stand-alone (since I did it – halfway anyway), but it would probably still be better if you actually read the first book in this series. For example I did not know by 51% what the KIN is, probably something like the mafia, but I’m not sure.