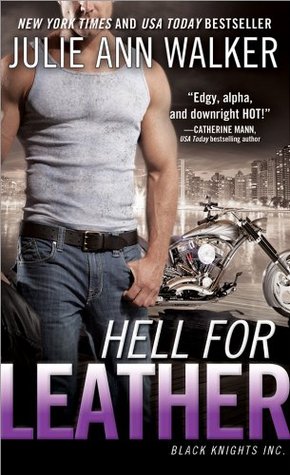 Synopsis:
Only the most urgent crisis could force Delilah Fairchild to abandon her beloved biker bar and ask the surly Bryan “Mac” McMillan for help. Her uncle—the man who raised her—has vanished into thin air, and Mac is the only person with the right connections to help her find him. What the ex-FBI agent has against her is a mystery…but when the bullets start to fly, Mac is her only chance of finding her uncle alive.

Mac knows that beautiful women can’t be trusted, but he has to put his natural wariness of Delilah aside in order to help her. With the clock ticking, Mac and Delilah find themselves holding on to each other in the wildest adventure of their lives.

I got this one as a gift from Cori from Reading In Pajamas. A big shout out and thank you to her 🙂

Now on to my actual review.

Hell For Leather is the sixth book in the Black Nights Inc.-series. I’ve always been wary if I should actually start the series, since I’ve read some bad reviews about it. But thanks to Cori, I finally had the chance to start it. Even if I read it totally out of order, but I do that sometimes. This time is thankfully didn’t bite me in the … behind.

The first two or three chapters were a little bit confusing, but I caught up pretty fast. Julie Ann Walker’s writing style made it all possible. But! I don’t know if that is possible for every book in the series, maybe I just got lucky and read the one book that sums everything up nicely. I honestly don’t think so, but I don’t want to tell you that you can read every book as a stand-alone when you can’t. Does that make sense to you?

“I-I stabbed you!”
“Eh.” He shrugged his big shoulders. “People get stabbed all the time”
“In what universe?” she demanded incredulously. “Most folks I know get hangnails, not knife wounds.” ~ 13% / page 46

Let’s move on to the characters.

I loved the main and side characters in this book. They were all so funny and they had this easy-going relationship, even though they trash-talk all the time to release tension in danger situations.

Delilah, our heroine, was probably my favourite character in this book, just because I loved her thoughts. Just check out the next quote and you will see why I love her.

Pretty damned pathetic, a little voice whispered at the back of her head, to which she immediately replied, Oh, fuck off.
Because, seriously? If a gal couldn’t rely on her own subconscious to have her back, then she couldn’t rely on anyone. Hmph. Her inner twelve-year-old crossed her arms and scowled. ~ 16% / page 60

Her POV was so much fun. I felt instantly connected with her.

Bryan AKA Mac was hilarous, too. Totally reliable and all. And he is the typical macho male with the whole attitude, but he’s adorable. He doesn’t want to have any feelings for Delilah, but we all know he has them nonetheless. Also he has some major baggage… or should I call it women issues, since he promised himself he would never ever again trust and need a women after something that happened in the past. Those issues were a little annoying, because everyone could see Delilah actually cared about him and didn’t plan to pull any BS on him, but still it was fun seeing him struggle.

Holy Hell! Byran “Mac” McMillan kissed her. Then grinned. And then he winked. Ok, maybe that knock to the head had been harder then she thought.  ~ 11% / page 36

Mac and Delilah had so much tension between them and it was so hilarious to see those two act upon it. There was this one scene where they were nearly doing it and then they get totally busted by one of the teammates. It cracked me up so hard.

The whole book sent me into laughing fits so often, especially Ozzie with his comments. Loved that guy and I hope he gets his own book. If not, I’m going to be angry.

“Yeah, right,” Ozzie scoffed. “There’s no such thing.” “No such thing as aliens, or no such thing as watching too much of the Syfy channel?”
“Well, the second, naturally.” The look on Ozzie’s face was dubious. “Because of course there’s such things as aliens.”
“Of course?” Zoelner’s lips quirked.
“Yeah. I mean, the universe is a pretty big place, right? And if it’s just us, that’s an awful waste of space.”
“You stole that from Carl Sagan,” Zoelner accused.
“No, I didn’t. I stole it form the movie Contact. Maybe they stole it from Carl Sagan.”
~ 34% / page 122

A lot of the jokes and comments in this book felt a little juvenile, but I’m just 20, so I think it’s funny. I can’t speak for other people though.

Then also this book was written from 5 point-of-views, if I’m not mistaken. Those are Delilah’s, Mac’s, Zoelner’s, Chelsea’s (possible love interest of Zoelner) and the bad guys’ POV. I’m ok with the amount of views, a few more and it would have become critical, especially since this is my first book in the series.

Now that I’m done with reading Hell For Leather I just have to find a way to read the other books in the series as well. Someone wants to be my dealer to fulfill my addiction to this series and books in general? No? At least I tried 😉

One thought on “[Review] Hell For Leather by Julie Ann Walker”