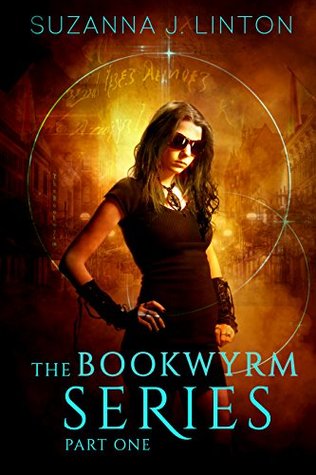 ​Well, I just finished a short fiction series called The Bookwyrm Series. It’s an urban fantasy that came in three parts. Actually, during the month of October, I’m running a contest on Mondays for people to win all three of those parts!

Before that, I published my second novel, Willows of Fate, which is also an urban fantasy. My debut was the more “traditional” fantasy and it’s called Clara.

​As the name suggests, The Bookwyrm Series is a series. I originally wrote it meaning for it be an episodic series. However, it became something different, almost like a serialized novel but not quite. I’m not sure what to call it!

​The Bookwyrm Series just wrapped up! The last story hit electronic shelves on 30 September. My next novel, the sequel to Clara, won’t come out until next year, possibly in the spring.

4. Which character of your book was the hardest to write?

​In The Bookwyrm Series, I would have to say​ ​Gabriel, who is the bounty hunter. Men are difficult for me to write and I’m not very good at mysterious men. I’m always worried they come off as a cliche.​

​I love to read, binge watch Netflix, and work in the garden. We’ve recently moved into a new home but I haven’t done anything with the flower beds yet. Oh, the shame! LOL

6. Did anyone inspire you to start writing or did you always knew you just had to write?

​I think writing is something I’ve always wanted to do but I didn’t feel really inspired until I read Anne McCaffrey’s Dragonriders of Pern Trilogy. The women in those books are so strong and complex that it made me think, “These are the kind of women I would like to write! They can be written! I bet I can do this, too!”

7. Any advice/tips for newbies?

​Don’t give up. Unlike other careers, a career as a writer takes a long, long time to turn over much, if any, success. At some point, you have to ask yourself, “Why am I doing this?” If you can’t think of an answer that will keep you going despite disappointment and failure, then you need to find something else to do.

And no matter what, you have to remain true to your voice. You can’t be a good writer if you aren’t honest in your voice.

8. Are you already writing a new book? Can you tell us a little bit about it?

​I am currently working on the sequel to Clara. So far, I’m calling it Clara’s Return. It picks up the title character’s story as she goes on a personal quest to discover her past. But it also follows the story of another character who has been thrown into a situation where he’s way over his head. And there are consequences from the last book that need to be dealt with! And there’s love, danger, and a rampaging giant!

10. Last but not least: What’s your favourite type of candy, if you don’t mind me asking?

​Right now, I have the biggest love for those peanut butter Snickers. My brother and I used to eat so many Snickers as kids that I, personally, got sick of them. But these peanut butter ones are amazing! Pretty much any time peanut butter and chocolate are combined is a winning combination for me.

I began writing when I was a little girl, feeling as if I was filling up with worlds and ideas. I needed to share them before they poured out of my eyes and ears.

At first, I wrote poetry before moving to fiction. Growing up in rural South Carolina meant I had to find my own ways of entertaining myself. I could often be found either reading or scribbling away in a notebook. Not much has changed since then.

One thought on “Interview with Suzanna Linton, author of The Bookwyrm Series”