~ Against The Dawn by Amanda Bonilla ~ 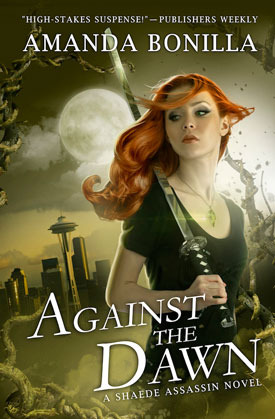 Six months can feel like just a couple of weeks when you’ve been away in another realm. Literally.

Now that Darian is back in Seattle, she’s ready to face the life—and the man—she left behind. But it’s not going to be easy when a ghost from her past shows up looking to wreak havoc on Seattle’s supernatural crime scene.

Darian isn’t as careless as she used to be, though. She and Tyler, her sexy Jinn protector, have come a long way in the trust department. And it’s a good thing too—because when Ty contracts her to assassinate a wickedly powerful supernatural who goes by the name of Mithras, it will take all her faith in Ty, and herself, to get the job done.

While Darian does whatever it takes to get to her mark, Xander, the Shaede King is busy making plans of his own. With Darian’s attention divided between Lorik’s secrets and her mission she might not be able to stop Xander from doing anything in his power to separate Darian from her sworn protector and in the process, destroy his own kingdom…

I got this book from Amanda Bonilla in exchange for my honest opinion. She even knew that I had not read the three books before Against The Dawn and she still gave it to me and told me I could still try. So sweet of her. Note: She didn’t ask me to read them, I asked 🙂

Well… like I said I have not read the books before Against The Dawn. Surprisingly it still worked out well. I had some struggles in the beginning, but the main character Darian made me read on. After a few chapters I could read it without any major problems. Still I feel like I missed a lot of awesome stuff in the previous book, especially the whole story with Kade. And that particular story sounds soooo interesting.

Anyway, I immediately liked Darian. Prior to Against The Dawn she went through some disturbing experiences and she is still not over it, so she is really wary of everything in the beginning and can’t stand body contact. I couldn’t either. On the other side she is really strong and does have really cool friends. I especially liked Tyler.

He’s a jinn and really intriguing, also he’s Darian’s… well, I guess boyfriend and bound protector. I need to know more about him. Like seriously. Give me more 🙂

The story was fascinating and I bet had I read the first three books it would have been even better, but since I didn’t I can’t give it 4,5 stars, so I’m settling with 4. I’m sure the next one will be even better.

On that note one little thing you probably want to know: Against the Dawn doesn’t end with a HEA, but a cliffhanger. A mean one.

Good thing I already own the next book.

One thought on “[Review] Against The Dawn by Amanda Bonilla”