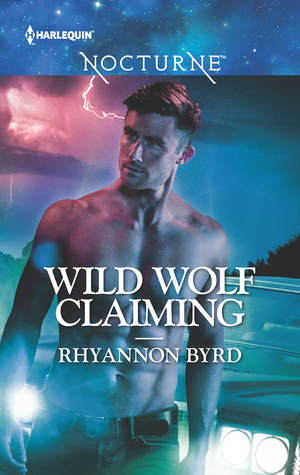 His wolf had never reacted this strongly to a woman… And. She. Was. His.

Werewolf Elliot Connors had come to the sleepy town of Charity to stop a madman from claiming his next victims for his macabre collection of sex slaves. After saving Skye Hewitt from being kidnapped, Elliot desires the diner waitress more than his next breath. All his senses scream that Skye is his life-mate. But his past has taught him well that nothing worth having ever comes easy. Now things are about to get bloody, dangerous…and wild.

~ Book provided by the author, Rhyannon Bryd (Thank you!). It does in no way influence my opinion nor my review. ~

Can you believe it’s already the eighth installment of the Bloodrunner series? Well, me neither. Time seems to fly by so fast. It’s crazy. Anyway, moving on to my review.

Wild Wolf Claiming tells the story of Elliot, who we got to know right in the beginning of the series, when he stood on the wrong side. Thankfully he made the right choice and changed sides. Since then he has been with the Bloodrunners. That happened nine years ago story-wise. Yes, little Elliot grew up. Can you believe it? He’s an adult now, doesn’t mean that he doesn’t have a lot of baggage. And I mean A LOT of baggage. He can’t let go of the past and has this thing with control, but I can’t really judge him regarding what he went through in the past. Still, he was one awesome character 🙂 and he loosened up the farther I read.

Then there is his mate, Skye. She was a cute little thing, who took the fact that Elliot is a werewolf really well, meaning she didn’t freak out. She just accepted it as a fact. She didn’t actually was a badass character. She was a little dependent on Elliot, but I still liked her. And in my opinion not every character has to be a badass, that would get boring really fast. As long as I can connect with the characters I’m fine and I could – with both, Elliot and Skye.

>> He’d only seemed to be worried about her, and that little fact was dangerously close to melting her into such a huge, embarrassing puddle of I’m crushing on him so bad and seriously want to have his babies it wasn’t even funny. ~ 11% <<

I liked that all the previously couples appeared for a short while again. It was really fun to see how their relationships grew (especially Cian’s and Sayre’s). Also I’m glad we got to see some of the Mercs, like Lev, again and I hope he will get his book soon. Even though I’m sure we will get Max’ book first, because of the whole story that played in the background in this book and we don’t really know anything about. It’s intriguing.

The one dilemma I have now is that I gave Blood Wolf Dawning, the book before Wild Wolf Claiming, 4 stars. And I liked BWD slightly more than WWC, but I don’t want to give WWC 3,5 stars, because it was still on the same level as BWD. So I guess it get’s the same rating. *feels no guilt about it*

I’m just forever ruined by Cian (and his book). I love me some Irishman 😉

Now, please be so nice and give me the next book, Rhyannon. Would you? Please? I’m begging you. *offers virtual cookies* No? Damn. 😉

Also just a little info: All books of the Bloodrunner-series can be read as stand-alones if you don’t care for minor spoilers. So try them. 🙂