~ My Sweet Demise by Shana Vanterpool ~ 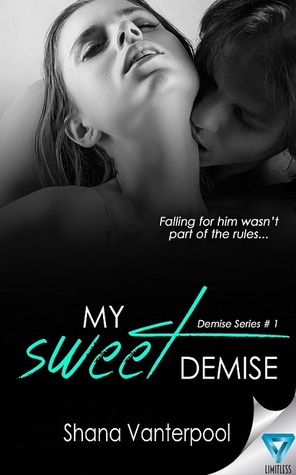 When twenty-one year old Raina O’Connor is kicked out of her room on short notice, she’s thrown into a frantic search for a new place to stay. As the situation becomes more urgent, her choices have dwindled to her least favorite option—ladies’ man, Kent Nicholson.

Kent Nicholson loves women, just not as a roommate…

When a gorgeous blonde with big hazel eyes answers Kent’s ad for a roommate, his red flags start flying. He’s looking for a wingman, not a chick who will put a damper on his game or drench his apartment in pink. It’s clear she’s in a bind, and something about her makes him break his own rules. But when he reluctantly accepts, it’s with four concrete conditions.

Be his wingman. Don’t get in his way with other girls. No bitchy attitudes. And most importantly, she can’t fall for him.

Pretty sure this was the world’s worst idea—ever…

Trust is something earned. Raina learned that the hard way when her father broke her heart as a child, making it easy to steer clear of relationships. But living with Kent somehow stirs emotions Raina has always forbidden herself to have. Plus, he’s everything she never wanted—untrustworthy, pigheaded…and gorgeous. Something tells her Kent isn’t free of his own secret scars…

Love can drag you down and spit you out, and be worth every second.

~ Book provided by author in exchange for my honest opinion

This book was like a rollercoaster. The never-ending kind. At first you are all excited and can’t wait to ride it and the few first rounds are fun, but after a while all you want is to get off of it. But you can’t. Because it’s never-ending. Meaning: IT. DOES. NOT. STOP.

I have quite some mixed feelings about this book. I quite liked it …till about 40%. Then the characters kind of got annoying in there ups and downs. They were fighting and one line later – and I’m not even exaggerating – they are saying they want to screw each other’s brains out, only to make out with other people – to make the other jealous, of course – a page later. It’s liked they had two personalities that come out at random to wrack havoc in the story. It wasn’t even funny.

The writing style was nice and understandable, but the whole story was a mess and it had such premise. It started off so good. It just felt like the author wanted to shove too much content into not enough pages, so she had to make the story chaotic.

Maybe some people like this constant change in mind of the characters, but I’m not one of those people.

I liked the characters in general, kind of. Kent was an ass, but he tried. All he does is party and drink though. Did I mention he’s an ass?

Raina was kinda cute, but whiny and always complaining. About everything. And let’s not start about her big sister. She was way too overprotective, like a hen trying to protect its offspring.

It really makes me sad, but I can’t give this book more than 2 stars. Sorry