~ Wolf With Benefits by Shelly Laurenston ~ 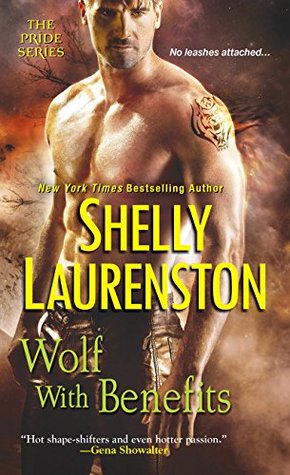 Ricky Lee has no plans of getting serious about anyone, but he will protect Toni Jean-Louis Parker. Not just because he’s been hired to do so, but because it’s the right thing to do. And if that means traveling around the country with one complicated She-jackal, dealing with chocolate-eating wild dogs, instigating trouble between his brothers, and having the most amazing sex he’s ever had…well, who said his job didn’t have perks?

Toni doesn’t know how she keeps getting herself into these situations. But even she has to admit there’s something about Ricky Lee Reed that she finds kind of interesting…and downright sexy. Now they just have to survive long enough to figure out if what they have is worth fighting for…

Where did that leave me with the series? Right. I was completely lost.

I was introduced to too many characters at once. All those siblings! (and let me be honest here for a second, they were all annoying.) Had absolutely no idea of the story. Jackals? Wolfs? How many shifter types are in this book? Who are all those people?

*insert pic of me ripping my own hair out*

I was completely lost. Had no link to the story, so it couldn’t hook me in. So after 21% of struggle I decided to quit.

Maybe – and that’s a big maybe – I will try to read the series from the beginning somewhere in the far away future, but right now I can’t deal with this book. I’m sorry.

The humour – at least in the scenes I understood – was good though.