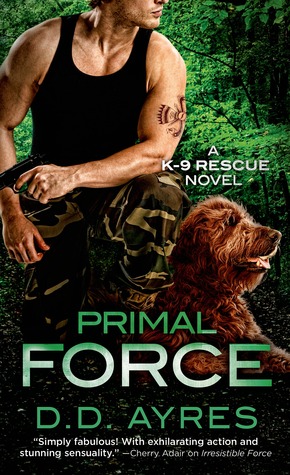 Passion is always worth fighting for…

Jori Garrison trains dogs for Warrior Wolf Pack, which provides service animals for disabled veterans. Four years ago, she was wrongly convicted of a crime—thanks to her no-good ex-fiancé. Now she just wants to live her life in peace with her beloved dogs. No men, no complications. But it’s hard to play it cool when a lethally hot male is on her tail—and the attraction is fierce, mutual, and dangerous…

Lauray “Law” Batisse is a Military Police veteran who was wounded in Afghanistan. Haunted by the loss of his K-9 partner in combat, he’s reluctant to accept a service dog named Samantha into his life. But once he meets her trainer—the gorgeous Jori Garrison—he can’t fight his primal instincts. And neither can Jori. This sexy alpha male might be the only man strong enough to unleash her desires. And when unseen enemies start hunting them down, he and his new K-9 partner might be her only hope… to survive.

I meant to write this review a few weeks ago, but I never found the time.

Anyway, Primal Force is the first book I read by D.D. Ayres and while it is the third in the series, it can perfectly be read as a stand-alone.

I don’t remember all the good stuff of this book crystal-clear, I remember the general feeling that I like it, except for two things… ok, maybe three.

First thing – and I’m totally a hypocrite right now, since I’m written in english, which is not my native tongue – is the uncorrect use of german. I’m german and there were some sentences that just made me cringe. For example: the author used “Heruntersteigen” to signal the dog to get off the bed. Everyone of my german languaged readers will probably be like

The hero actually said “heruntersteigen”. I can’t wrap my mind around that. I for my part tell my dog that he should get “runter” or “ab” when I want him off the sofa. I don’t know one german who would use the basic form of “heruntersteigen”.

I hate it when my own language gets mistreaded in a book, at least use a language I don’t understand. Or make sure your used language is correct, by for example asking native german speaker and maybe not google translate?

The second thing is that we get a POV from the dog. Yes, you read right. From the freaking dog!! You’ve got to be kidding me?!

Truth be told, I first disliked the POV of the dog and found it ridiculous but as the book progressed I kind of found myself liking it. So this point is both on my “did not like” – list and my “things I liked about the book” – list. I can’t help it, I like dogs 😉

The third and last thing was the hero and the way he acted towards others and his dog Samantha. Yes, I get that he has PTSD, but that’s not a reason to constantly dismiss his dog and being mean to Jorie, the heroine. He just wasn’t very likeable for most of the book.

Like I said in the beginning, while all the points I just mentioned were negative points, I actually quite enjoyed it and will probably read the next one of the series as well.