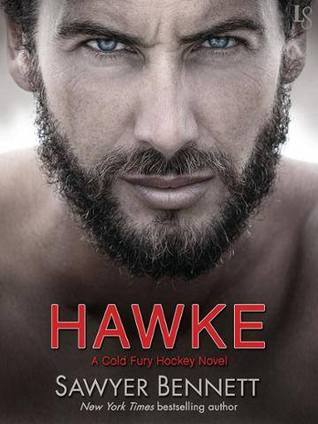 The Carolina Cold Fury hockey team proves that love is a power play. As Sawyer Bennett’s New York Times bestselling series continues, the league’s most notorious party animal gets blindsided by the one that got away.

Off the ice, elite defenseman Hawke Therrien enjoys his fair share of booze and good times. And why shouldn’t he? He’s worked his way up from the minor leagues and made himself a star. The only thing Hawke misses from that life is the pierced, tattooed free spirit who broke his heart without so much as an explanation. She’s almost unrecognizable when she walks back into his life seven years later—except for the look in her eyes that feels like a punch to the gut.

Vale Campbell isn’t the same girl she was at twenty. As crazy as she was about Hawke, her reckless behavior and out-of-control drinking were starting to scare her. She had to clean up her act, and that would never happen with Hawke around. Cutting him loose was the hardest thing Vale ever had to do—until now. Because she’s still crazy about Hawke. And if he could ever learn to forgive her, they just might have a future together.

I confess that before reading Hawke I read some other reviews – which I normally don’t do, but I was curious. A lot of the people I follow were disappointed by Hawke, even though they did like the previous books in the series. That made me a little wary of Hawke. And I have to say: Yes. It is not as good as the previous books. BUT it’s not bad either. I enjoyed it a lot and I’m not that into second-chance romances, which this clearly was.

Both our main characters had their ups-and-downs in the course of the story. Both did things wrong in the past and while I can understand Vale’s point I was annoyed by her for most of the book. If she had trusted Hawke in the past everything would have worked out – probably – but no, she was stubborn and had to cut all ties with him. I ended up liking her in the end, but I wanted to smash her head into a wall for almost the whole book.

Hawke on the other hand, I quite liked. He was entertaining enough and I liked how he tried to get back with Vale without being overwhelming.

The story of this book had a little bit too much drama in my opinion – especially caused by Vale’s best friend Avery. Still I enjoyed Hawke and can’t wait to read the next book in the series.

Before I forget it, I also liked how all the previous characters took part in the story. I always love to see how their relationship growns.