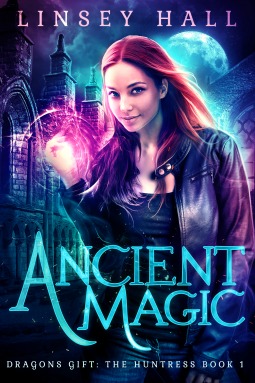 I’m good at two things: finding treasure and killing demons. Lying low is a close third—but not because I want to be good at hiding. I have to be. I’m a FireSoul, one of the unlucky few to inherit a piece of the dragon’s soul. Being born with the dragon’s covetousness should be a sweet gig – I have the power to find and steal any type of treasure, including the powers of other supernaturals.

But it doesn’t come without a price – stealing powers requires that I kill, and others would destroy me if they discover what I am. In a world full of magic, hiding my species is the only way to survive. Finding magical artifacts is the only way to pay the bills. It’s a dangerous job when you can barely use your magic, but that’s one of the things I like about it.

When Aidan Merrick, the most powerful shifter in the city, hired me to find an ancient scroll, I didn’t want to take the job. His immense amount of power reminds me of too much of murky memories from a past I can’t remember. But I don’t have a choice. The scroll reveals what I am. And if anyone finds out, I’m dead.

This is not the first book by Linsey Hall I’ve read. In fact I already read some books of her Mytheana Arcana series and I will probably read some more of that series. As I will with this series.

Ancient Magic was fun and had a bit of a Indiana Jones/Lara Croft feeling to it with all the searching in mysterious areas.

I liked Cass and Aidan, even though both were kinda flat characters. I would have liked a bit more depth in their character and a bit more romance between those two, but I guess this will be a slow-burner – as I see Aidan as a potential love interest – which is fine for me.

Also a lot of stuff could have been avoided if Cass wasn’t so annoyingly afraid of her powers. Had she developed and honed them years ago, everything would have gone so much smoother, but no, there’s no fun in that.

Can I also mention that Cass and her sisters were basically alike? They had exactly the same personality.

Another thing that kind of bothered me was that I felt like Linsey Hall wrote this book for ten year olds, I can’t really describe why I feel that way, it’s just how it is. I can’t change my feelings.

I will read the next book in the series, but if the characters don’t developt some sort of individual character traits then I will quit.

I notice my review is mostly negative right now, but that doesn’t mean that I didn’t enjoy Ancient Magic. I liked the premise and I’m sorry if I sound too harsh.