~ Winging It by Cate Cameron ~ 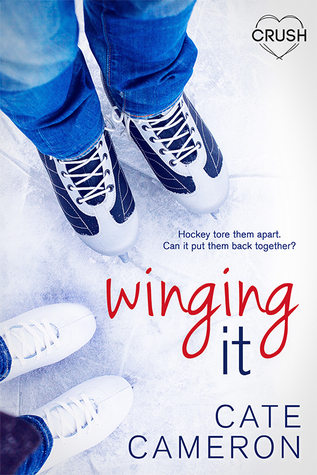 Disclaimer: This Entangled Teen Crush book contains adult language, ice-melting kisses, and a swoon-worthy hero. This fake relationship romance will have you wishing for a hockey player of your own…

Natalie West and Toby Cooper were best friends growing up, on and off the ice. But when Toby’s hockey career took off, their friendship was left behind. Now Natalie has a crazy plan to land her crush—Toby’s biggest rival—and she needs Toby’s help to pull it off.

When Nat asks Toby to be her fake boyfriend, he can’t say no. Not when it means getting his best friend back. But Natalie is all grown up now, and spending time with her—even when it’s just playing hockey together—stirs up a lot of feelings, old and new. Suddenly pretending to be interested in her isn’t hard at all…if only she wanted him and not his enemy.

Hockey tore them apart. Can it put them back together?

Winging It was freaking adorable. It made me swoon and laugh and I just flew through this book.

Winging It is appearently the third book in a series, but can be totally read as a stand-alone since that is what I did. I didn’t even knew it was part of a series till I looked it up on Goodreads, but I will definitely read the other two books as well! I had so much fun with Winging It.

I saw someone compare this book to The Deal by Elle Kennedy and while I can see why you would draw that comparison, those two books are complete different, except for the ice hockey and girl and boy fall in love theme. While The Deal was more mature and – I want to say – dirty (totally Garrett’s fault), Winging It was cute and innocent. You have to choose yourself what you like more, but I personally like both. I like NA and YA. And Winging It was definitely YA and the first YA book that features ice hockey I know about.

I was rooting for Natalie and Toby from the very beginning and I sometimes wanted to reach into the book and shake them so badly. I always love the friends turn lovers theme, but what I like even more as a theme is when they fake dating to get someone else to notice them and then they fall in love. Totally happened here.

On to the side characters. We have Scott, who Natalie wants to date, and he is a complete douche for the greater part of the book. In the end he was kind of nice, but I still have my doubts about him and am not sure I could ever like him. Then we have Dawn, Toby’s ex and Natalie’s friend. I didn’t get how she could do what she did. I personally wouldn’t help bringing my ex and my friend together. I would be pissed at both of them. I kind of missed a motive for her helping them. If we would have gotten a bit more of her perspective, maybe I would have understood it. But as it is, I did not. I liked her though.

The writing style of Cate Cameron was really nice and I read the book through in one sitting. I might have been tired and only intended to read to 50%, but I couldn’t put it down. So at 3am I finished it and of course, was tired the next day as well. What I do for a good book *sigh*

I absolutely recommend this book if you are in the mood for a cute YA featuring ice hockey and an adorable cute and you might want to check out the previous books in the series as well.