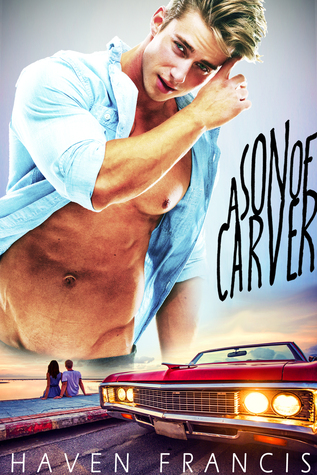 Sometimes the best version of yourself is the one you can only see through someone else’s eyes. But what happens when those eyes belong to the one person you don’t want them to?

Thanks to her father’s affair and her parent’s resulting separation, Presley Knox has been ripped from her life in California and dropped into an abyss in the middle of Georgia. With her alternative looks and creative spirit, trying to find her place in a sea of jocks and cheerleaders is hard, but doing it while living with her cousin who belittles her every chance she gets is almost impossible. There is one person in Carver who embodies everything Presley hates about her new life and she can’t help but use him as the outlet for all of her frustrations.

Nash Carter’s bad boy image isn’t a façade; he drinks too much, sleeps around, makes his money street racing and has zero plans for his future beyond living a rowdy life with his likeminded dad and older brother. His good looks, cut body and popularity have always gotten him anything and anyone he’s ever wanted. That is until Presley Knox showed up at Carver High.

Nash knows to steer clear of Presley and her sharp tongue that’s always aimed at him. But that becomes impossible when they’re paired together for a semester-long photography assignment that promises to push them into the depths of each other’s personal lives. In order to survive the semester, Nash implements a new strategy: get the one girl who’s immune to his charm to change her mind about him.

With Nash’s unwavering pursuit to know everything about her, and with the nagging voice inside her head that’s insisting there’s more to him than she’s letting herself see, Presley struggles to keep her wall firmly in place. When it slowly begins to crumble, Nash wonders if he should have kept his distance after all because the girl that’s been hiding under Presley’s hard shell is breaking his heart wide open.

Nash has been a lot of things to a lot of girls, but Presley’s the only one he’s ever wanted to shelter and protect. But how is he going to do that when he knows she’s right to keep their friendship a secret in order to protect herself from him?

Due to mature language and content, A Son of Carver is intended for readers 17+. It can be read as a standalone or as book two in the Carver High series.

This was the first book by Haven Francis I’ve read, therefore I have not read the first book in this series and while I think it would have helped a lot in the beginning if I did, you can still read it as a stand-alone.

The jumping right into the action scene in the beginning put me a bit of and seriously made me consider DNF-ing this, but after I got through that particular scene, I really liked reading A Son Of Carver.

Presley was fun and pretty sarcastic, basically the type of heroine I like, and Nash was, once you looked under the surface, not as perfect and man-whorish (is this even a word? lol) as he wants everyone to think.

In some part the story dragged a bit and went around in circles, but overall I liked reading A Son Of Carver. It had the right amount of drama for my taste and I’ve always been a fan of enemies-to-friends-to-lovers stories, which this 100% is.

Books have always been a huge part of my life. Sometimes when I visit my parents I nab an old Sweet Pickles, Sweet Valley High or V.C. Andrews book just to stir up memories or to share them with my kids.

I fell in love with the art of writing and story telling when I took an introduction to English lit. class my freshman year of college and realized how moving and life changing words can be. Really, it was The Bell Jar by Sylvia Plath and The Yellow Wallpaper by Charlotte Perkins Gillman that changed my path in life. I promptly became a double major, adding Literature to my art degree.

After graduation I took a great job restoring art, but I eventually found my way into the world of professional writing. I was very fortunate to be able to travel the world forecasting trends in the home furnishing industry as a staff writer for a prominent industry periodical.

When my first child was born, I took my maternity leave and when it was time to return to work, I just couldn’t do it. All of my creative outlets we’re put on the back burner for several years and then one day… I started writing again. It was exhilarating to write my first book (that I hope to publish one day if I can ever whittle it down to an acceptable length!). That book was the first of many. Some are unedited, some are far too long, some are only half finished, one is lost completely!

My first release, Love Is Relative, is by far my most fun, steamy, fast-paced romance. I’m looking forward to my other stories finding their way onto book shelves in the near future!

2 thoughts on “[Review] A Son Of Carver by Haven Francis”