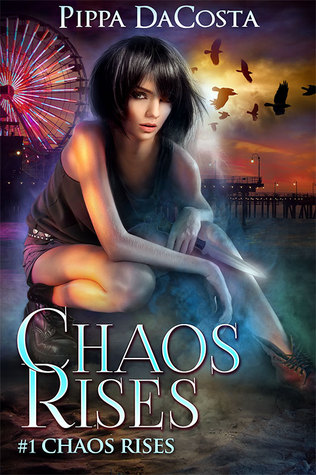 ‘When the veil fell, any half bloods not strong enough to withstand Chaos were torn apart. Some, like me and my brother, survived The Fall. Most did not.

That’s the good news. The bad news saw a whole other world try and devour ours. Demons, we call them. They came in countless waves. Destroying. Killing. Many people thought it was the end…

The Fall lasted a week.

Hell almost claimed our world as its own.

And then, from one day to the next, it was over. The veil came back, stronger than ever. I’m not sure if anyone knows how it was put right. But I do know it’s been six months since The Fall, me and my brother are on the run, and the leftover demons aren’t the most dangerous things in LA.
We are.’

This was my first book by Pippa DaCosta and let me tell you, it won’t be my last.

Though I have to be completly honest with you, the first 10% of Chaos Rises I wasn’t convinced. In fact I was bored enough to consider quitting, but I have this policy that I give every ARC 20% to convince me and damn, it did. After Torrent, a character in this book, appeared, I was so hooked to the pages. I was mad at my need for sleep, which made me put it down for the time being and the first thing I did when I woke up the next morning was reach for my nightstand to grab my Kindle and finish Chaos Rises.

I really like Pippa DaCosta’s writing style, she made me hate Allard, through and through demon, who we can call the villain of this book, but at the same time I loved him and I was kind of rooting for him. Then there was Torrent, who I already mentioned above, he was a water half-demon and for most of the story I was torn between loving him and being suspicious of him. I can’t wait to see more of him.

Then we have our heroine, Gem, a ice half-demon. I really liked Gem. She wasn’t perfect, no, she struggled with her demon and her conscience. She would do anything for her brother, like betray the people she might consider her friends, though she has no real idea what a friend even is. She has no social skills, likes to kill demons and hates being submissive to Allard, so he doesn’t kill her. Whenever she let go of her reign over her demon I was rooting for her to demolish her enemy. Her fight scenes were fun to read. Like you can maybe see, I was pretty excited whenever she could fight someone.

The only thing I wished this book would have had was a glossary of some kind where the individual types of demons would be explained. The demon types where explained in the book, but 100 pages later I couldn’t remember them anymore. My short-term memory sucks 😉

Anyway, I can’t wait to read the next book in the series to read more about Gem’s journey and I should probably read The Veil series as well, since the Chaos series is a spin-off of it 🙂

Born in Tonbridge, Kent in 1979, Pippa’s— “Wait a second. Let’s cut to the chase. I write kick-ass urban fantasy & sci-fi novels with conflicted characters, breathless action, and no-holds-barred dialogue. My books may not leave you feeling all fluffy and warm inside, but they will excite you. There will be plot-twists, angst, probably a few dead bodies, and very likely your favorite character will turn out to be the bad guy. Don’t say I didn’t warn you…”