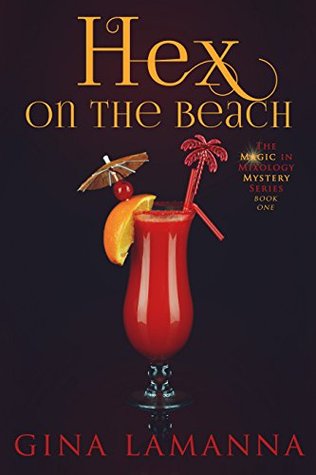 Lily Locke has never believed in witches and wizards, ghosts and magic, shifters and vampires—especially cute blonde vamps with blood-intolerance issues. A rising star at a hotshot marketing agency in Minneapolis, Minnesota, all Lily knows is that she’s a PowerPoint guru, an Excel ninja, and a coffee-maker extraordinaire. Not to mention she’s next in line for a huge promotion.

All that changes when Lily’s assistant delivers a strange quiz to her, one titled A Magical Assessment for Normal Folks. With it comes the promise of a land she’s never known existed. A land where Lily not only discovers her biological family for the first time, but a place where she can make a difference, change lives, and step into the role she’s destined to fulfill.

But first, Lily must admit she’s a witch. Then, she has to acknowledge that the tall, dark, and mysterious man who offers his help is strictly focused on business…at least, for now. When a body turns up dead and the next target is Lily, she must trust her powers and accept the help of her newfound friends. Otherwise, she’ll never survive the trials of the magical island tucked far, far away in the frigid waters of Lake Superior.

Welcome to The Isle.

This novel is a full-length, humorous cozy mystery featuring a splash of magic, a handful of witches, and a dash of romance. It’s rated PG-13 due to mild language and some romance.

~ Book provided by the author in exchange for my honest opinion.

Going into Hex On The Beach I didn’t know what to expect exactly, because it was my first book by Gina LaManna and I just knew that this wouldn’t be a typical book about witches.

I really liked the idea of a girl – Lily – being the fated mixologist on a weird island with weird people, for example a vampire who has a blood intolerance and a shifter, who is unable to shift into anything scarier than a kitten, aka her cousins.

Lily’s interaction with her family was quite funny, because most of her family isn’t right in the head, they are all a little insane. Also Lily wasn’t stupid, she knew she had to work to fulfill her potential and I’m quite impressed that she could memorize the whole book she had to study in only 2 days. I wish I could to that, school would be so easy.

Then there Ranger X – I’m really intrigued about what his real name is and why he calls himself Ranger X in the first place – and the potential of a love interest. Hex On The Beach is definitely a slow-burner in that department. Not that that is a bad thing.

I’m actually surprised about how light a read this book was, even in the “dark scenes” there was something to laugh about. It for sure was a great read for a lazy sunday evening.

Also the moment when the title of the book makes sense – best feeling ever!

I really enjoyed Gina LaManna’s writing style, the only thing that bothered me a bit was that some scenes were made up of so much description, sometimes I would have liked a bit more dialogue. But I guess you need a bit more description in the first book of a new world, otherwise how would you describe it properly? 🙂

I definitely can see me reading the next book Witchy Sour.

y & Los Angeles home, although she’s never quite lost her Midwestern accent. She loves whipped cream and marshmallows more than anything! When she’s not writing books, she’s often hanging out with some of the best “book buddies” on Facebook or training for a marathon.