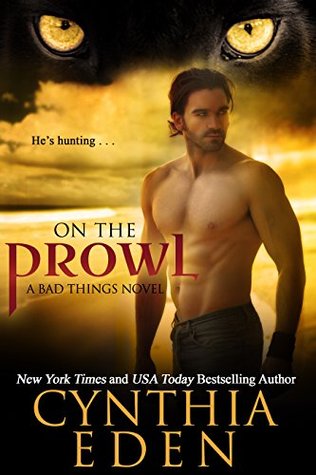 Time to embrace your inner evil.

Rose Kinley never intended to be one of the most feared creatures to walk the earth. Once upon a time, she was a human—one who fell in love with a mysterious stranger. But when she got caught in a paranormal war, she lost her humanity and died…only to wake later as a vampire.

Now Rose has a choice. She can continue to try and be the good girl she once was or she can let her darkness out to play. Maybe it’s finally time for her to step into the dark.

Panther shifter Julian Craig has a mission—protect Rose at all costs. It’s his fault that she lost her human life, and he literally made a deal with the devil so that she would have a second chance as a vampire. And as part of that deal, he’s supposed to keep his hands off Rose. An impossible task considering the dangerous lust he feels for her.

When Rose is targeted by a paranormal collector, Julian knows that he will have to let his own beast out if he is to protect the only woman who ever touched his battered soul. Rose may be afraid of the darkness she carries, but Julian is more than ready to show the world just what kind of a monster he truly is. Julian isn’t afraid of the dark…but the monsters that wait in the shadows? They will bow to him.

He’ll show her just how good it can feel…to be bad.

Lately I’ve been having some bad luck with second books in a series, so I was wary if it would happen again, but I didn’t need to worry. It’s Cynthia Eden were talking about. She can’t write bad paranormal romance books 😉

I gave the previous book, Devil In Disguise, 4 stars, which in my opinion is a really good rating, so imagine my surprise that I liked On The Prowl still a teeny tiny bit more, why I will explain in the following review.

While I liked the story of Devil in Diguise I wasn’t all convinced by the characters, Luke and Mina. With On The Prowl it was different. I already liked Julian when he was just a side character and Rose was pretty bad-ass and had her own mind. Together those two characters worked well. Their relationship had chemistry and I really liked how you could see the trust and love growing between them.

Another reason – aside from the characters – that made me like On The Prowl more was that I’m a huge sucker for vampires and shifters and in this book we got both, so I was pretty happy.

The overall story of the book was interesting and had me hooked to the last page.

I have no complains when it comes to Cynthia Eden’s writing style. Like always she captured me right from the start and I basically flew through the pages. Hell, I’ve read like 40 books of her. I should like her writing style, don’t you think? 😉

I can’t wait to see what will happen in the next book, called Broken Angel. It will release in December and will feature Rayce. Why is December still so far away?

Take a look at my review of the first book:

The Devil In Disguise >> Review