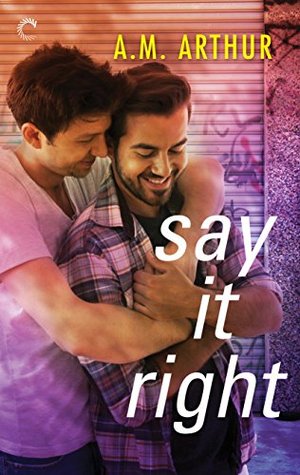 After his parents kicked him out for being gay, Marc Villegas lived on the streets before getting a second chance. Now he’s giving back by working at a shelter for LGBT teenagers—because helping fight their demons keeps his own at bay. Including his infatuation with the former best friend he’s sure is straight.

Anthony Romano hasn’t seen Marc since Marc left home eight years ago. In his confidant’s absence, Anthony turned to heroin. Now at rock bottom, he has an offer from Marc to help him get clean. Detox is hard and ugly, but not as hard as admitting the truth: he’s in love with Marc. Always has been.

I’m going to jump right into the review with saying that some people might feel like the romance of this book develops too slow, but I personally found that it had the right pace which worked perfectly with the way the story was told.

After reading the first book of this series – and liking it – I was quite happy when I saw that it would get a second installment and was available for review on NetGalley. I have to be honest now and say that I had Say It Right for more than 3 month now. I’ve been kind of procrastinating reading it, because I wasn’t sure I would like it as much as the first one. The reason why I thought that was the image of Marc I had in my head from book one. I wasn’t that interested in his story, but after just the first chapter of Say It Right, I was hooked and loved his POV’s.

I’ve read a few books by A.M. Arthur and this has to be the one with the darkest undertone yet, because it deals with sexual abuse, drug abuse and illness of the body and mind.

Both our main characters struggled a lot, both with their problems and their feelings and I loved to see them develop. From how they didn’t trust each other at the beginning to how the lean on to each other at the ending. They had some really heartbreaking scenes.

I really like how the book was written and should there be a book three in this series, I will definitely read it. Not sure about which character it could be, but I’m all for a third installment of the series.