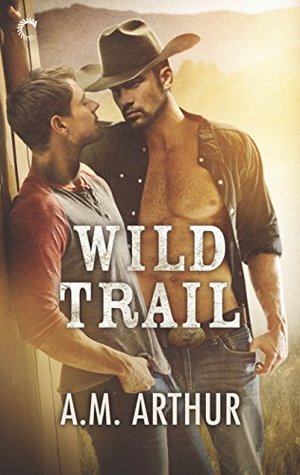 Mack Garrett loves the rolling hills surrounding his Northern California dude ranch. Leading vacationers on horse trails with his two best friends is enough – romance is definitely not in the cards. When a sexy tourist shows up at Clean Slate, he’s as far from Mack’s type as can be. So why is the handsome city slicker so far under his skin in less than a day?

Roughing it in the middle of nowhere isn’t anywhere near Wes Bentley’s idea of fun. Then he lays eyes on the gruffest, hottest papa bear he’s ever seen. But Mack is as hard to pin down as he looks – distant, sharp-tongued, and in desperate need of a shave. Until a campout gone wrong strands both men in the mountains with nothing to do but get to know each other.

Mack intends to keep his closely guarded heart out of Wes’ very talented hands. But for a seven-day cowboy, Wes is packing some long-term possibility. The cold country air can do wonders for bringing bodies together – but it will take more than that to bridge the distance between two men whose lives are worlds apart.

Once again I’m reading a book by A.M. Arthur and I liked it, didn’t love it, because I had some issues with it, but I liked it.

Let’s start with the positive stuff.

#1: A.M. Arthur’s writing style, I liked her writing style in previous books and also liked it in Wild Trail.

#2: this book wasn’t as angst-filled as her other books, don’t get me wrong, I like angst, but this was a welcomed change.

#3: that action scene near the end was cool and I mean a different kind of action than sex 😉

#4 gay cowboys, I’ve read a lot of M/M books and non of them ever featured cowboys, and while I love my gay/bisexual sport players, this whole cowboy thing was a welcomed change as well.

#5: I liked the characters, especially Mack, and while I liked them and how they all interacted, they are also the cause of all my negative points, which are the following.

The whole daddy/boss nickname situation between Mack and Wes – I did not get that at all, because there was not one element of the whole BDSM dominance stuff in this book and whenever I read one of those two nicknames, I had to cringe inwardly. It just felt off. Might only be me though that thinks so.
Another thing that bugged me just a bit was the relationship overall between Mack and Wes. While I loved that they didn’t immediately jumps into bed to have wild sex, I didn’t get what their relationship was built on. Yes, they have deep talks and date and romance – and I liked it – but I just didn’t feel it. Maybe I’m defective. LOL

Overall I still liked it and will definitely check out the next two books, because I’m curious how the whole Avery and Colt thing will work out, also I’m eager to see if the book about Reyes and Miles will be as slowburner-y as I think it will be.

You know what thing I think A.M. Arthur could also write really well? NA M/M sports themed books, because her books are always – in my unknowing mind – well researched and like I already mentioned I’m a sucker for that setting. LOL, don’t mind me and my cry for more sports themed books, I read a bunch of them and are running out.