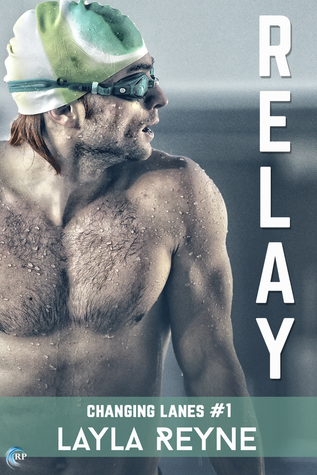 Captain is not a title Alejandro “Alex” Cantu takes lightly. Elected by his teammates to helm the US Men’s Swim Team, he proudly accepts the role, despite juggling endless training, team administrative work, and helping out on the family farm. And despite his ex-lover, Dane Ellis—swimming’s biggest star—also making the Olympic Team.

Dane has been a pawn in his celebrity parents’ empire from crib to pool, flashing his camera-ready smile on demand and staying deeply in the closet. Only once did he drop the act—the summer he fell in love with Alex. Ten years later, Dane longs to cut his parents’ strings, drop his too-bright smile, and beg Alex for another chance.

Alex, though, isn’t ready to forgive and forget, and Dane is a distraction he doesn’t need on his team, until an injury forces Alex to accept Dane as his medley relay anchor. Working together, their passion reignites. When Dane’s parents threaten reprisal and Alex is accused of doping, the two must risk everything to prove Alex’s innocence, to love one another, and to win back their spots on the team, together.

When I received Relay I was in a foul mood after dnf-ing the last three books I’ve read, so I put it aside, because I was sure if I would read it with a feeling of lingering disappointment that I would not like it. That was a wise decision by me. Instead I read it after I read a book I absolutely loved. Lol.

Layla Reyne is a new-to-me author, but after reading Relay I will check out her other books as well.

Anyway Relay had all the things I love combined: m/m romance, an enemies-to-lover relationship that also included a second-chance romance and it had a sports theme. I loved the whole animosity between Dane and Alex in the beginning of the book. That was fun.

Also their whole 2nd relationship was a slowburner, which I also loved. Slowburners are more fun in my opinion and the relationship makes more sense if its built up slowly instead of over the course of just 30 pages like in some books I’ve read. We didn’t get to find out a lot of their first relationship though. Normally I’m not a big fan of flashbacks, but in this case I would have liked one or two, but that’s me nitpicking.

Dane’s parents I wanted to hurt – a lot. Poor Dane. I kinda disliked the fact though that Dane let them control his own life for that long of a time, but I’m glad he finally stood up to them.

The writing style was really good and while I read some reviews that were disappointed that the whole swimming thing wasn’t as prominent as they hoped and that we didn’t find out if they won any medals at the Olympics, I was quite glad this was the way it was. I want an incentive to read the next book – which I would have read nontheless, just saying –  to know how they did at the Olympics.

Also I’m curious about Bas and Jacob. Their book will be the second one in the Changing Lanes series and according to Riptide Publishing’s website it’s called Medley and will be released April 23. Can’t wait.