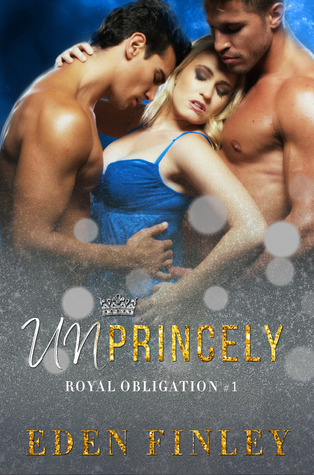 A bisexual prince isn’t the only scandal in this palace.

Destined for the crown he doesn’t want.
Bad boy Alexander hates his title. He’s the tabloids’ favourite hot mess. Xander thrives in the attention but wishes they’d leave those rumours about him on the editing room floor. The ones about the type of company he likes to keep.

Irresponsibility takes a backseat when tragedy strikes the royal family. Gone are the days of being the reluctant prince. Instead, duty and obligation become Xander’s life. Until he meets Delia.

Not as lady-like as she seems.
Lady Cordelia Hillington was raised right. She knows how to act appropriately in public and appear demure in front of the dignitaries she grew up around. Which is why Prince Alexander is taken aback by dirty promises falling out of her mouth at a charity event.

After a steamy night at an anonymous, high-end sex club with a handsome stranger wearing a mask, Xander and Delia are desperate to find their Cinderella man. Little do they know, he’s closer than either of them would suspect.

Determined to remain professional.
Roman Elliot, former soldier turned royal guard, has kept his feelings for the prince a secret for years. His job is everything to him, and he’s not going to do anything to jeopardize it. That’s the plan until he finds Prince Alexander at a sex club with none of his security detail accompanying him.

It’s a night Roman wishes he could forget but being assigned as Delia’s protector for the summer makes it hard. He can’t let them know it was him they spent a night with, but he gets the feeling both Xander and Delia already might know …

**Unprincely is a 54,000-word MMF contemporary royal novel with over the top characters, impromptu proposals, and just a touch of Cinderella-ism. HEA guaranteed.**

This was way better than I anticipated. Why you ask?

When Eden Finley offered ARCs, I told her I would love to read it but I was also upfront and told her I wasn’t sure I would like it, because quite frankly m/m/f is not really my genre. She gave me one anyway, which makes her awesome.

Starting this book I tried to go into it without comparing it to any other m/m/f book I read and disliked before, and I think that worked out great. Another thing that made me like this book was definitely Eden Finley’s writing style. There is just something about it that drew me in from the first page and I probably would have finished it in one sitting if I hadn’t decided to start it in a parking lot waiting for my brother.

I’m actually surprised I liked this book so much and I am going to read the second book in this series – willingly, because I want to ;). One other reason I can think of why I liked this better than other books, is that there weren’t as many sex scenes as I thought there would be. Don’t get me wrong, I had nothing against threesome sex scenes, they are pretty hot. It’s just that in my opinion m/m/f books are usually flotted with them and there is no story aside from it whatsoever. It’s just one sex scene after another after another, you get my drift. Unprincely was different in that regard. I liked it. The three different POVs might have also been a factor. I’m a sucker of various POVs.

Unprincely might be the first m/m/f book I actually enjoyed, so kudos to you Eden Finley. Well done.