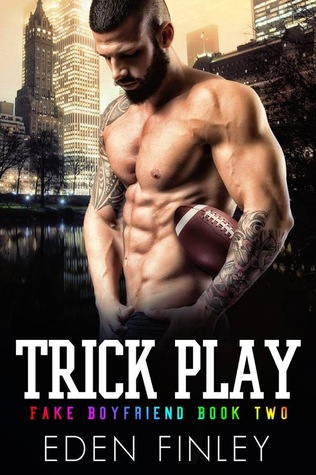 Want to know the fastest way to get screwed out of a football career? Get photographed in a compromising position in a gay bar. Yep, welcome to my life.

My agent says he can fix my image. He wants me to become the poster boy for gay football players. Me? I just want back on the field. I’ll do anything to play for the NFL again, even pretend to have a steady boyfriend. If only my fake boyfriend wasn’t Noah Huntington III—the most arrogant, entitled rich guy in the world.

Pretend to be Matt Jackson’s boyfriend, my best friend said. It’ll be fun, he said. What Damon neglected to mention is Matt is surly and bitter. Being his boyfriend is a job in itself. From his paranoia over being constantly photographed to his aversion to PDA, being with Matt isn’t the care-free fake relationship I expected when I signed on to do this.

It’s supposed to be a win-win. I get to stick it to my politician dad who thinks no one is good enough for the Huntington name, and Matt’s reputation of being the bad boy of football dies.

What I don’t expect is to start caring for the guy. That’s not part of the plan. Then again, neither is fooling around with him on my private jet.

I was lucky enough to get an ARC of Trick Play, make that a capital LUCKY, because I’m in love with this series. It is the second book in the Fake Boyfriend series and I read most of it on my 2h train ride, which was a bad idea, because it’s funny. Like laugh-out-loud funny. Not a good thing to read on a stuffed train. I got some ‘huh?’-glares.

Another thing I loved about Trick Play was that the characters are really relatable, also did I mention the book was funny? Noah’s brand of humour is totally my type of humour and Matt was funny as well. The drama was on-point for me, not too much and not too less. Also the fake-boyfriend-trope is one of my favourites and I like how it gets delivered here in Trick Play and in the previous one Fake Out (check it out, trust me).

I highlighted so much stuff in my copy (which I don’t normally do that much), some funny scenes/sentences, some sappy moments, especially that very last sentence in the book. It melted my heart. So adorbs.

Here is one quote that is absolutely spoilerfree 😉

Someone get me a crash card, because my ego just flatlined.

I can’t wait for book three. Is it out yet? LOL, no, I’m totally not impatient, and I absolutely want a book about the character, whose story wasn’t planned that way (I won’t mention the name, because spoiler?)