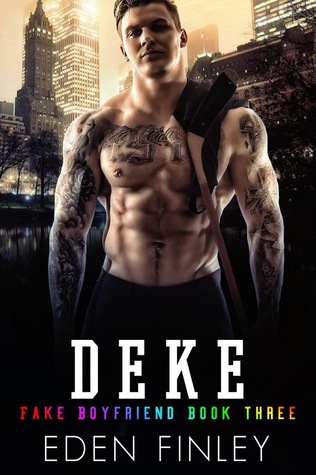 Word of advice: don’t come out to random guys in public restrooms. Even if they’re charming and adorably nerdy and offer to help.

My family believe I can’t be happy if I’m not out to the world. I have a bitter ex-boyfriend and an unstable NHL career to show for it. A fake boyfriend seems like an easy and quick solution to get my family off my back, and this guy is volunteering. I take him up on it without asking his name.

I really should’ve asked for his name.

Word of advice: learn how to introduce yourself properly.

In my defense, I don’t recognize Ollie Strömberg right away. I cover football, not hockey.

That all changes when my editor reassigns me.

It’s a lesson I should’ve learned by now. Nothing’s changed since high school. Jocks still hate nerds. But even worse, athletes hate journalists. Especially ones who know their secret.

~ ARC provided by author in exchange for my honest opinion

Sweet Neil Patrick in a harness (read the book and you will understand this), this book was soooo good. The ARC hit my kindle when I still had a friend over and it might have been possible that I was a bit annoyed that she hasn’t gone home yet, so I could read it. Just a teeny-tiny bit.

After reading Trick Play, the second book in the series, I was totally expected a book about Talon, because his story was kind of teased about, but instead Eden gave us Lennon and Ollie and I have to say I’m absolutely not mad about that.

Like the previous books Deke was an absolute joy to read. It was funny – freaking hilarious to be honest, that joint scene really got me laughing my ass off – and I loved the characters, even though I wasn’t sure I would like Lennon, when Eden announced that he would be one of the main characters. I had absolutely no reason to worry, he was awesome.

Even though the next book in this series won’t be a fake boyfriend type of book, I can’t wait for Talon’s book and would love to get my hand on it yesterday.

I totally recommend Deke to anyone, in fact I’m planning to reread it again this evening. You might want to start with Fake Out though so you get to meet the whole clan, even though all the books can be read as stand-alones in my opinion.

I want to give 4,75 stars, because I rarely give the full 5 stars but to hell with it, every single book of this series deserves 5 stars.

One thought on “[ARC REVIEW] Deke by Eden Finley”