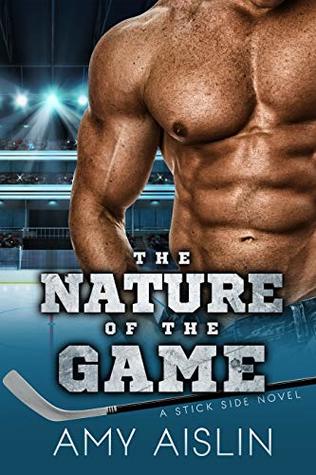 The Nature of the Game by Amy Aislin

Book synopsis: Six years ago, an ultimatum forced Dan Greyson to make a choice that cost him everything he loved most. One of those things? His boyfriend, hockey player Ashton Yager. Now that they’ve crossed paths again, Dan isn’t about to let the opportunity slip away. Ash’s reappearance in his life is just the catalyst Dan needs to escape the rut he’s fallen into…and win back Ash’s trust and love.

Ashton Yager, once burned and now a little bit shy, didn’t mean to publicly come out as bisexual. But now that he has, he’s got to deal with the consequences, including the fact that it might’ve cost him his NHL contract. With his job on the line, he needs to keep his head down, work hard, and play the best hockey of his life. Rekindling things with Dan? That’s not exactly keeping a low profile. It’s also never going to happen, not after Dan walked away once without an explanation.

When a hurricane forces Ash to seek shelter out-of-state, he and Dan find themselves in the same B&B, where old feelings resurface. But with everything Ash has on the line, does he dare play with fire again?

“What kind of pizza should I get?” he asked. They moved forward in line a few paces, the rain plop, plop, plopping onto the top of the umbrella. It was cozy underneath it. Not uncomfortably so. Dan’s body was warm against his where it brushed against his left side. He was slim and fit with a swimmer’s body—or a runner. His light brown eyes were bright and his curly hair was made even curlier by the damp weather. Curly bordering on frizzy. Cute.

“You a meat eater?” Dan asked.

Ash shot him a disbelieving side-eyed glance he hoped conveyed Are you freakin’ kidding me?

Dan grinned. “How about spicy foods?”

“I’ll have to make you my Thai chicken curry one day. I learned the recipe from one of my friends at Columbia. She’s an international student from Thailand, so it’s the real deal.”

Don’t talk about school. Got it. Ash wasn’t stupid—he could read body language.

Ash ordered a slice of the hot chicken, Dan got four cheese, and they added on a basket of fries and a basket of mozzarella sticks because they were growing boys and needed it, plus a soft drink each to wash everything down. It was wet everywhere, and the rain was still coming down. Not in sheets, but steadily. They found a bench tucked under a tree just beginning to sprout spring leaves that was a tiny bit less wet than everything else. They perched on the very edge, juggling trays and baskets of food.

Sitting underneath the umbrella, the raindrops cast gentle shadows across Dan’s face, making him appear ethereal and soft. Something tilted in Ash’s chest, making the world fuzzy and sweet.

I really, really liked The Nature of the Game and I’m not that big of a fan of second chance novels, but I liked the way it was done here. What normally bothers me, is that the main character forgives too quickly. That isn’t the case here. It was done in a timely manner that seems appropriate to me.
I’m also a big fan of dual POV and ice hockey romance in general. So this book has all the things I like.

Amy started writing on a rainy day in fourth grade when her class was forced to stay inside for recess. Tales of adventures with her classmates quickly morphed into tales of adventures with the characters in her head. Based in the suburbs of Toronto, Amy is a marketer/fundraiser at a large environmental non-profit in Toronto by day, and a writer by night. Book enthusiast, animal lover and (very) amateur photographer, her interests are many and varied, including travelling, astronomy, ecology, and baking. She binge watches too much anime, and loves musical theater, Julie Andrews, the Backstreet Boys, and her hometown of Oakville, Ontario.