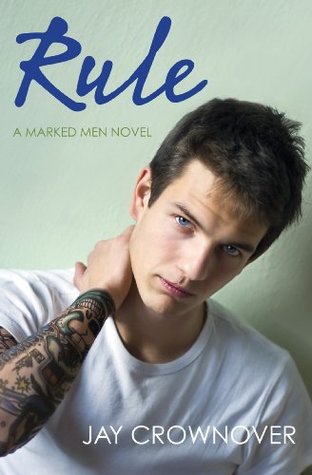 Shaw Landon loved Rule Archer from the moment she laid eyes on him. Rule is everything a straight-A pre-med student like Shaw shouldn’t want – and the only person she’s never tried to please. She isn’t afraid of his scary piercings and tattoos or his wild attitude. Though she knows that Rule is wrong for her, her heart just won’t listen.

To a rebel like Rule Archer, Shaw Landon is a stuck-up, perfect princess – and his dead twin brother’s girl. She lives by other people’s rules; he makes his own. He doesn’t have time for a good girl like Shaw – even if she’s the only one who can see the person he truly is.

But a short skirt, too many birthday cocktails and spilled secrets lead to a night neither can forget. Now, Shaw and Rule have to figure out how a girl like her and a guy like him are supposed to be together without destroying their love…or each other.

A lot of people recommened Rule to me and I also heard a lot about it in a Facebook group I’m in and though I liked it, I did not love it.

The main reason being that I did not always like the character Rule, after whom this book is named. He was a bit of a jerk sometimes. I get that he has issues, but that’s not a reason to pull all the shit he did. I liked though that he pursued his dream to become a tattoo artist and how close he is to his friends. Then there was Shaw, the other main character. I didn’t like her either. She felt flat and was a bit annoying sometimes. I respect her persistence though. Whatever Rule did, she did not give up on him. That makes her more likeable than Rule.

Another issue I had with this book is the fact that there was as good as no chemistry between Shaw and Rule. At least I thought so. They developed this spark and then – snap – it was gone again.

If I have to put this book on a scale which goes from “boring as hell” over “average” to “awesome, awesome, awesome”, I would put it somewhere around average. I wasn’t blown away, but I wasn’t bored to hell either. It was an ok read to fill a boring evening.

I’m supposed to share interesting details about myself so that my readers get to know me so here we go in no particular order: I’m an natural redhead even though I haven’t seen my real hair color in years, I’m a big fan of tattoos and have a half sleeve on either arm and various other pieces all over the place, I’ve been in the bar industry since I was in college and it has always offered interesting insight into how men and women interact with each other, I have 3 dogs that are all crazy, I live in Colorado and love the snow, I love music and in all reality wish I could be a rock star not a writer or a bartender but I have zero talent so there is that.
I love to write, love to read and all I’m interested in is a good story with interesting characters that make the reader feel something.
Thanks for taking the time to check my stuff out….
Jay Crownover