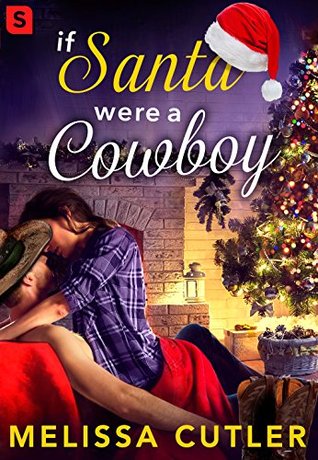 This Christmas, Santa wears a Stetson.

Paul Savage loves Christmas at Briscoe Ranch Resort, when he gets to take a break from being a back country guide to play Santa in the resort’s lobby and talk to kids about toys. The last thing he expects is his high school crush to come waltzing in as his new assistant photographer, wheeling a suitcase that’s more naughty than nice.

Kelly Walker is a disaster. All she’d wanted was spice up her life by saying ‘yes’ to every opportunity, which is when the universe started pelting her with ‘no’s. So when she comes across a job listing for a holiday photographer working with the sweet, scrawny boy whose advances she’d laughed off in high school, she jumps on the chance to turn her bad Karma around by giving Paul a second chance.

Trouble is, Paul’s anything but scrawny anymore, and his cowboy swagger throws her grand plans for a loop—especially when he tempts her with a red hot proposition of his own. Kelly’s in way over her head, but as she gets swept up in the magic of Briscoe Ranch’s holiday charms—and Paul’s—could Kelly’s year of ‘no’s be leading up to the ‘yes’ of a lifetime?

I really loved Melissa Cutler’s Bomb Squad series, so when I saw If Santa Were A Cowboy on NetGalley I had to request it, even though these two series have nothing to do with the each other.

I started it right when I got it, back in September, but I couldn’t get into it. I blamed it on me not feeling christmas feelings yet. So I pushed it a bit back in my reading schedule. I started it again yesterday, but even now – with Christmas right around the corner – I couldn’t get invested into this book and that’s really sad. Maybe I would be more interested in this story and its characters if I actually read the previous two book in this series, but I honestly don’t think so.

The main reason why I couldn’t get into this book: Kelly. I didn’t like Kelly much. I didn’t agree with her choices. She was just …. a bitch. Paul deserved a much better girl for himself.

If you’re in the mood for a romance book with a christmas theme and you don’t care for a bitchy heroine, this might be it for you. For me it was ok, but I could have done without it. I guess I stick with Melissa Cutler’s Bomb Squad series.

I love ice-hockey, so when I discovered that there are indeed books about ice hockey players and they are romances, I was like: I NEEEEEEEEEEDDDDD.

So today I decided to share the love for my top 4 series.

All four series can be read as stand-alones, but for the whole experience I suggest  reading them in the right order – not that I follow my own advice 😉

Hannah Wells has finally found someone who turns her on. But while she might be confident in every other area of her life, she’s carting around a full set of baggage when it comes to sex and seduction. If she wants to get her crush’s attention, she’ll have to step out of her comfort zone and make him take notice…even if it means tutoring the annoying, childish, cocky captain of the hockey team in exchange for a pretend date.

All Garrett Graham has ever wanted is to play professional hockey after graduation, but his plummeting GPA is threatening everything he’s worked so hard for. If helping a sarcastic brunette make another guy jealous will help him secure his position on the team, he’s all for it. But when one unexpected kiss leads to the wildest sex of both their lives, it doesn’t take long for Garrett to realize that pretend isn’t going to cut it. Now he just has to convince Hannah that the man she wants looks a lot like him.

Hockey star Alexander Crossman has a reputation as a cold-hearted player on and off the rink. Pushed into the sport by an alcoholic father, Alex isn’t afraid to give fans the proverbial middle finger, relishing his role as the MVP they love to hate. Management, however, isn’t so amused. Now Alex has a choice: fix his public image through community service or ride the bench. But Alex refuses to be molded into the Carolina Cold Fury poster boy . . . not even by a tempting redhead with killer curves.

As a social worker, Sutton Price is accustomed to difficult people–like Alex, who’s been assigned to help her create a drug-abuse awareness program for at-risk youth as part of the team’s effort to clean up his image. What she doesn’t expect is the arrogant smirk from his perfect lips to stir her most heated fantasies. But Sutton isn’t one to cross professional boundaries–and besides, Alex doesn’t do relationships . . . or does he? The more she sees behind Alex’s bad-boy facade, the more Sutton craves the man she uncovers.

With a famous NHL player for a step-brother, Violet Hall is well acquainted with the playboy reputation many hockey stars come with. She’s smart enough to steer clear of those hot, well-built boys with unparalleled stamina. That is until she meets the legendary team captain—Alex Waters.

Violet isn’t interested in his pretty, beat-up face, or his rock-hard six-pack abs. But when Alex inadvertently obliterates Violet’s previous misapprehension regarding the inferior intellect of hockey players, he becomes more than just a hot body with a face to match.

In what can only be considered a complete lapse in judgment, Violet finds out just how good Alex is with the hockey stick in his pants. But what starts out as a one-night stand, quickly turns into something more. Post-night of orgasmic magic, Alex starts to call, and text, and e-mail and send extravagant—and quirky—gifts, making him difficult to ignore, and even more difficult not to like.

The problem is, the media portrays Alex as a total player, and Violet doesn’t want to be part of the game.

Welcome to Destiny Falls, New York, home of the Bomb Squad—an ice hockey team full of rugged military heroes. But the season’s biggest match-up isn’t on the ice as one of their own prepares to go head to head with his new boss…

Allison Whitely’s ex left her with a mountain of debt and Cloud Nine, a struggling boat rental business. With zero job skills, her only hope of getting back in the black lies in a brooding ex-soldier who has her seeing red…

Theo Lacroix’s teammates are counting on their star player to help them win an upcoming high profile hockey game. But when a sexy tornado of a woman sweeps into town and expects him to help her with Cloud Nine, Theo is tempted to skate away from it all.

Theo vowed to never again be someone’s knight in shining armor, but his feelings—and desire—for Allison are becoming harder to ignore. He longs to save her, but to win Allison’s love, he’ll have to throw out his old playbook and take the ultimate risk…playing from the heart.

Don’t forget: All these books can be read as stand-alones. At least in my opinion. And they are totally worth it 😀

A Sorceress Of His Own by Dianne Duvall

Deal With The Devil by Cynthia Eden

Burn For Me by Ilona Andrews

In The Air Tonight by Lori Handeland

The Bad Boy, Cupid & Me by Hasti Williams

The Selection by Kiera Cass

The Return by Jennifer L. Armentrout

I could do this the whole day. LOL. But I can also say just check out my 2015 shelf on Goodreads ;).

Also I was feeling lazy, so I just linked to the books on Goodreads without a reason for loving them. I just did, what more to say?

What are some of your favourite of the year 2015 so far? Leave your link in the comment section below 🙂