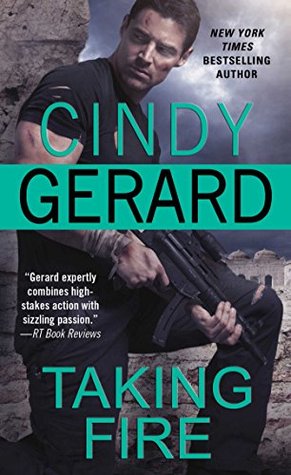 Six years ago, tough-as-nails military contractor Bobby Taggart met the woman of his dreams in war-torn Kabul—a sexy, whip-smart war correspondent who approached him at a local bar, took him to bed, made him fall in love…and then mysteriously disappeared. In her wake, the terrorist leader he’d been mining for valuable intel was assassinated—then Bobby discovered his phone had been bugged. And he’s pretty damn sure he’s been played for a fool…

It’s confession time, guys: I have had the ARC of Taking Fire since around January and only just finished it. My reason for being so late was the fact that I was afraid. Afraid of not liking it. I loved Cindy Gerard’s BOI’s series and I didn’t want to be disappointed by Taking Fire. Also I haven’t read the three previous books of the One-Eyed Jacks series.

Now after reading it I wish I could travel back in time and scold my old self for not starting this book earlier. Except for the overly long prologue – lasted till 27% – I liked Taking Fire a lot.

It was action-packed, the suspense was high and I really like the pair this book featured.

I can’t really say anything about the story without it being a major spoiler, except maybe that I liked how it and the characters developed. The ending was really awesome.

What I also liked was though this is an action book it focused more around the character relationships then other books of the same genre I know. I liked it.

Cindy Gerard’s writing style was as captivative as ever and I really like how she writes the bantering between the team members, hilarious. 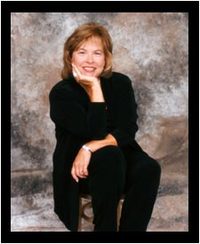 Between writing and working full time you wouldn’t think Cindy would have much time for anything else. And while she does find her work and her writing rewarding, there does have to be more. Cindy has more. Much more. She is happily married to the perfect man. Tom’s a cowboy, ladies!

Cindy has a passion for pink depression glass — she always has her eye out for the special piece to add to her collection. Cindy’s down time often takes the form of the classic “busman’s holiday.” She loves to read and most of all, she loves to read at their summer place, a cabin in the woods on Lake Kabetogama in northern Minnesota.